I have been metal detecting for many years above the water and below. This year  I decided to buy a new underwater detector. A Minelab Excalibur, arguably one of the best underwater detectors out there. My biggest problem, I bought it in September just as the diving season here in Connecticut starts to wind down. There's nothing worse than having a new toy and a limited amount of time to put it to use.  We have a favorite local dive site here where we do much of our "everyday diving"   It has a typical New England bottom, muddy flats with a few rocks and tires to break up the monotony. It turns up several old bottles a year but  being in a local harbor there's no telling what might turn up. I decided to try out the metal detector and see what popped up. I was thinking a brass cleat from a boat, maybe an old coin lost by a fisherman, or maybe an old bronze prop from a boat! but having detected for years, I knew the far more likely scenario was that I would find a bunch of bottle caps and pop tops, Bringing them to shore to be deposited in the trash. 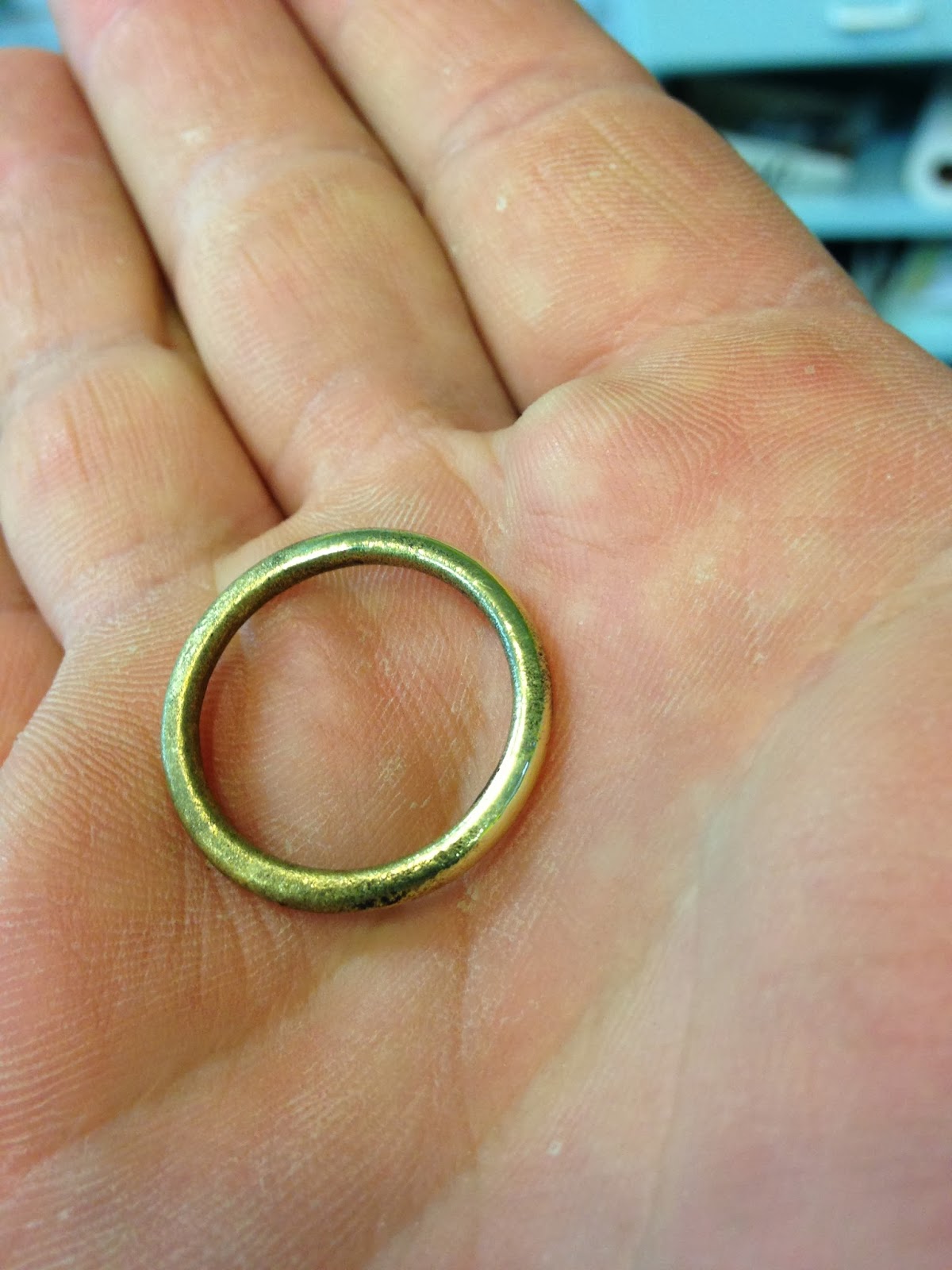 After quite a long swim, I turned on the detector and began my hunt. Five minutes of fiddling around brought me to my first good target. Sounds good I thought, so I began to dig... and the mud billowed up, completely obscuring my view. By touch I located my target, holding on and waiting for the mud to settle, my first target  was a ring! But wait, was it a brass ring or gold? I couldn't tell. I was so excited I couldn't believe that my first find was what looked like a ring! I put it in my finds bag and continued on for about ten more minutes until I found my next target.  looking in the bag, I couldn't see the ring. It must have fallen out as I made my snail trail across the bottom! I can't believe this I thought,  I can't surface and tell my friends that I found a gold ring, then lost it right away! The abuse I would take for that would be legendary. "sure you found a gold ring... Did the leprechaun come and steal it back for his pot of gold?" ugh.
I decided to try and follow my trail back, hoping to find it laying on the muddy bottom. Not having any idea where I had been, I started the search. thirty minutes later, I found the ring with the detector again. Needless to say, the ring came back to shore gripped tightly in my hand. 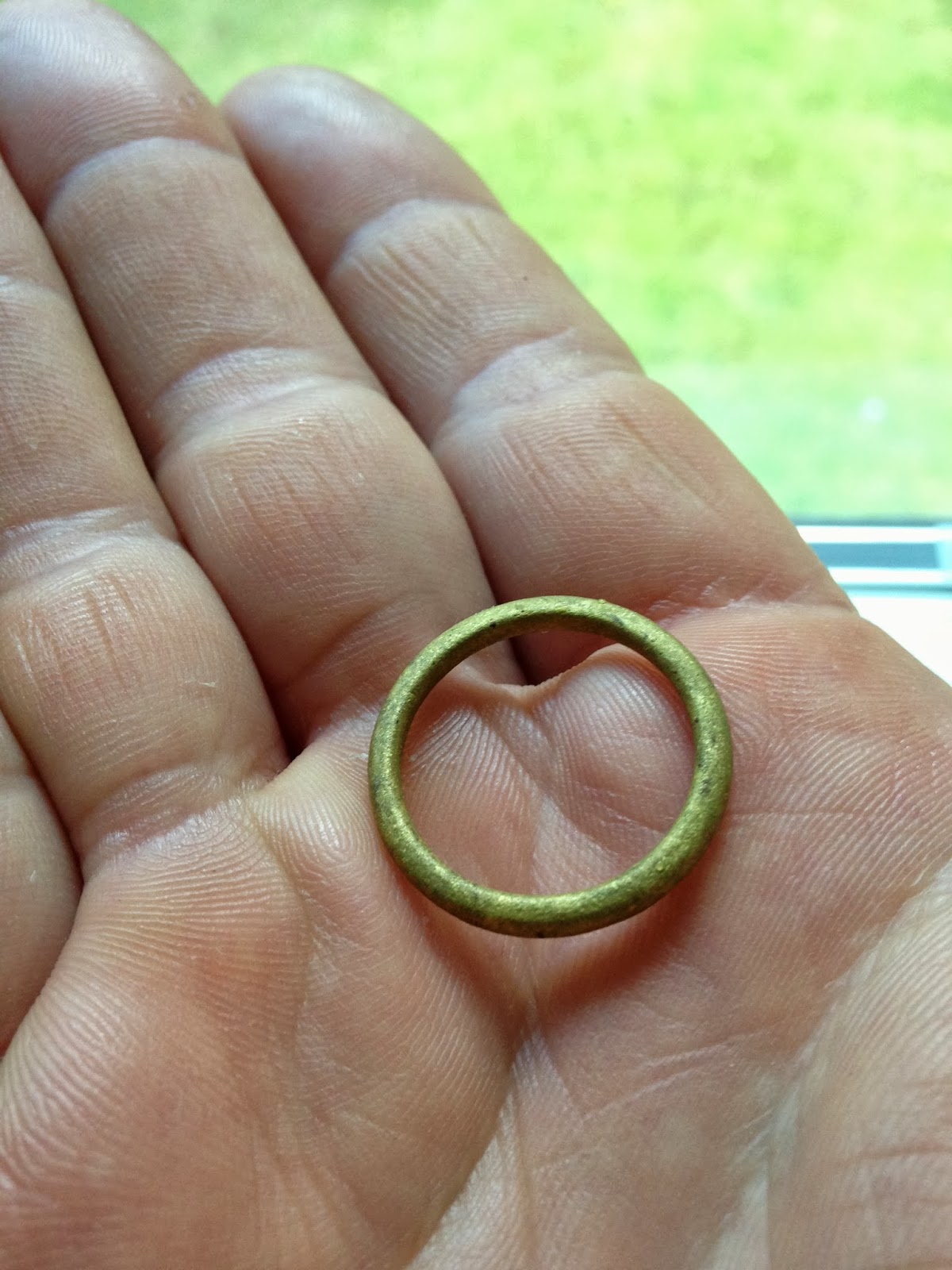 After cleaning it up, the pitting and wear show that it was obviously on the bottom a very long time.  One of my favorite finds ever, it makes me wonder who lost it?  A fisherman tending lobster traps? I'll never know..

I am a scuba diver from Connecticut. I am along time NAUI DiveMaster, photographer, teacher and explorer. I want to share my experiences, travels and discoveries with you. My passion in life is to be underwater. I love to travel all over the world diving, exploring new places. I also relive my travels thru my photography, which i will be showcasing as part of my blog. When I dive here in New England, I'm often found looking for lost treasures underwater. I enjoy searching for old coins, jewelry, old bottles and ship wrecks. Sometimes the treasures even come in the form of Scallops, Clams or lobsters!